Another child was celebrated this past week and it was so much fun! We give the kids a few options in how they want their birthdays to go and Paxton chose my favorite. We take them out all by themselves. They pick the restaurant and stores to spend their money. To just have one on one time is rare in our family, so that makes it special. They have our undivided attention and this kid took full advantage. He really is a lot of fun. 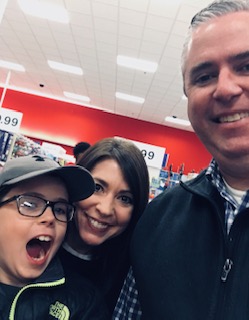 His favorite stories in the Bible are when David fought Goliath and the end stories in Revelation. He is pretty excited about a new Heaven and a new Earth. It is in these choices that I see even more of his heart. I see him a bit like David, “of whom he testified and said, ‘I have found in David the son of Jesse a man after my heart, who will do all my will.” (Acts 13:22). It is when this started coming to light, that I started searching for books on how people who lived mighty lives for God were raised. Specifically, I looked mainly at Billy Graham. His mother played a huge role in shaping the obedient and available person he became.

You just never know who sits around your table. Any parent might be the one raising the next President of the United States. Another, the one who leads a nation to repentance. Maybe even one who does incredible military exploits, that saves the masses from destruction. Who knows? I have no idea what this child will become, but I trust the One who created him. It is my job to raise him to teach him this. It is my conviction that he needs to be pointed to truth. He needs to read and hear scripture that backs this up. He needs to know, “For by Him all things were created, in heaven and on earth, visible and invisible, whether thrones or dominions or rulers or authorities – all things were created through Him for Him.” (Colossians 1:16). Also, read in Isaiah 43:7 “…everyone who is called by my name, whom I created for my glory, whom I formed and made.” That is who we are and the reason we were made. And I will spend all my days showing, telling and teaching him that is who he is – made by God for His glory.

Happy Birthday Paxton! I love you so much!

“Worthy are you, our Lord and God, to receive glory and honor and power, for you created all things and by your will they existed and were created.” Revelation 4:11